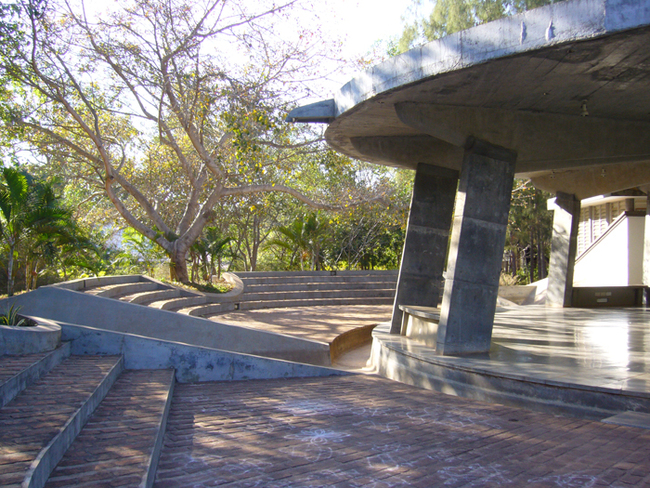 The building of the Sri Aurobindo World Centre for Human Unity, located in the Bharat Nivas grounds, is used for a wide variety of Auroville-related meetings and cultural events.

Simple and beautiful. Creating the first part of the World Centre... in five months, by Architect Anupama Kundoo

Architect Anupama Kundoo faced a challenge. She was asked to create a multi-purpose hall for the Sri Aurobindo World Centre for Human Unity within five months with a minimal budget of Rs 15 lakhs. Colleagues advised her against it as “it has never been done before, so it can't be done.” But Anupama, who is not averse to doing things differently, took up the gauntlet and managed not only to create the building within the time and budget prescribed (the final cost was Rs 3,500 sq. metre against the going rate in Auroville of Rs 8,000 sq.m.), but also to leave a landmark of simple beauty at the entrance of Bharat Nivas.

The World Centre consists of a roofed circular open hall with a diameter of 16 metres. At the back, two rooms of 55 square meters each have been built. For the rest there are no walls. Outside there are tiers of seats, forming a low-rise amphitheatre. A glass-covered opening in the centre of the roof allows daylight to strike the lines of inlaid stainless steel that mark the pattern on the stone floor.

“This is my first large public building in Auroville,” says Anupama as we walk around it, “and I have experienced a great joy in designing and building it. Actually, I felt quite inspired. Somehow I ‘saw' the entire building. And what I saw was not something cheap in view of the time and money restraints, but a simple and beautiful structure that would accentuate the open space of the hall. After all, this building is for the Sri Aurobindo World Centre for Human Unity, and I couldn't possibly begin with trying to find the easy way out.”

The design of the building draws upon Vaastu, the ancient Indian tradition that defines how a building should be constructed. “My use of Vaastu is not slavish—it's more intuitive—but I used some of its important elements. For example, Vaastu says that when you create a structure, it has a being called the vaastu purusha. This is usually represented as the shape of a man lying down, and it is important that one's design totally includes this shape rather than missing out parts of it. It is also important when people use or live in a building that their own being is in tune with the being of the building.”

Anupama wanted the hall to be circular because she believes this shape emphasises unity. “When you sit in a circle everyone is focused on the centre, and this is where our point of unity lies.” The amphitheatre elements are in the shape of a square. “This is a very strong holding shape, but the corners of the square are rounded, so you can imagine the inner circle of the hall continuing to expand outwards, reflecting that whatever happens here should expand outwards to the rest of the world.”

Many people were involved in the project. “There were the members of Kolam, my team of architects, who did the detailed design and took responsibility for the construction. There was the review board of Auroville architects who checked if my ideas were feasible within the limits of costs and time. I had help from Professor Ambalavanan of the Indian Institute of Technology in Madras , who did the structural calculations and encouraged me throughout. There was Shri Vishwanathda from the Sri Aurobindo Ashram, who is in his nineties but nevertheless came several times to the site, together with Shri Sawardekar, to help me find the load carrying capacity of the soil and with the initial design. There was Dhanapal, the Auroville site manager whose exemplary dedication and site management were essential to manifest this structure. And last but not least there were the workers. They have been wonderful, working overtime whenever it was necessary, and showing a willingness to cooperate beyond the usual monetary motivation that I have rarely seen in Auroville.”

Asked about her experience of the last five months, she laughs: “I love to work at this pace. If you are under this pressure, it really forces you to think of ways to do it, and think fast. It has been a thrilling experience.”