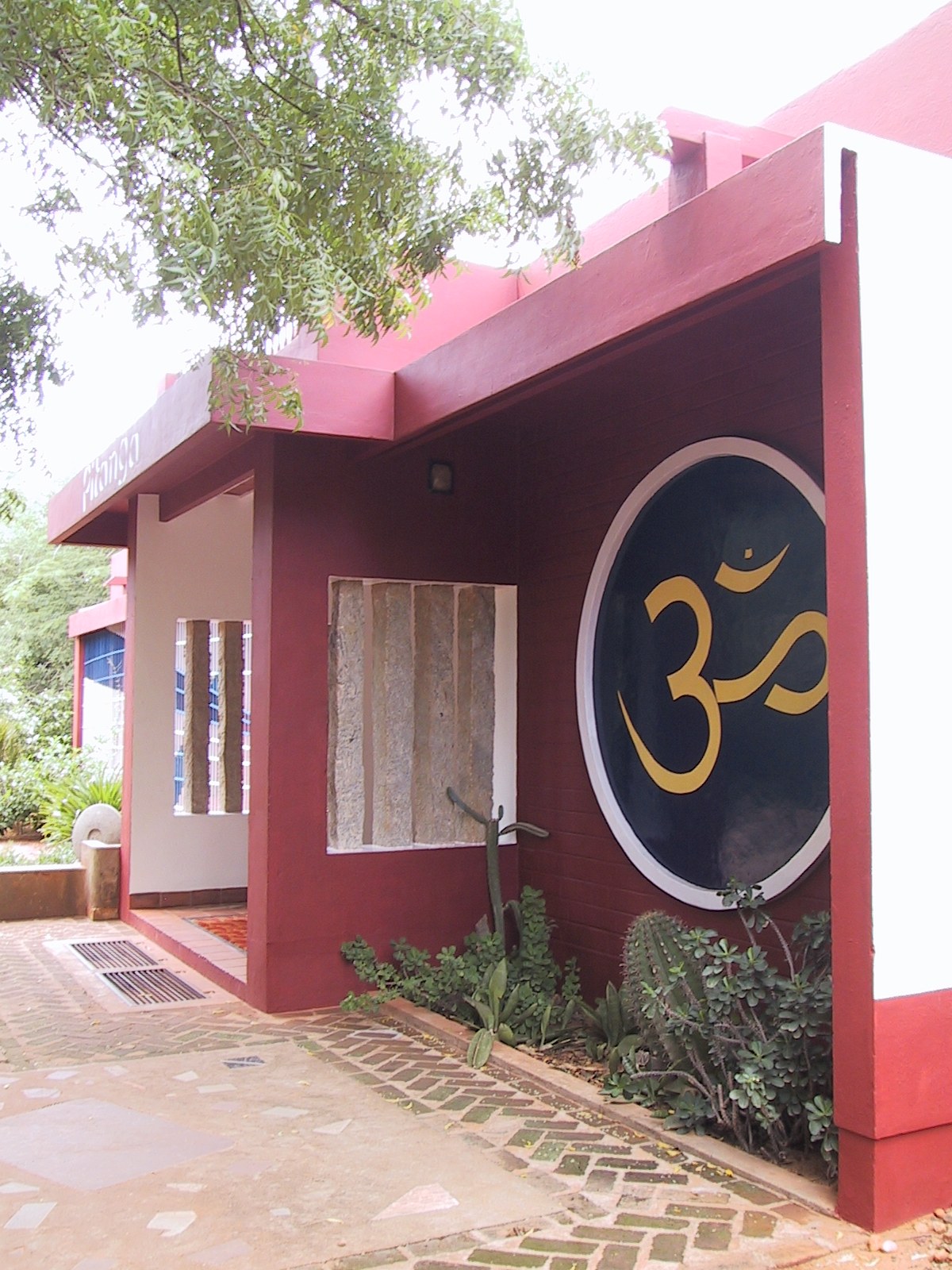 Located very central in Auroville and nestled down into the lush greenery of the Samasti residential community, Pitanga is Auroville’s first and only multi-cultural community centre.

Here, emphasis is laid on providing physical and cultural education in a beautiful and quiet atmosphere. As its Brazilian and Sanskrit name implies, Pitanga stands for enabling one to blossom into self-awareness, a conscious contact with one’s being.

Perfection is the true aim of all culture, the spiritual and psychic, the mental, the vital - and it must be the aim of our physical culture also. If our seeking is for a total perfection of the being, the physical part of it cannot be left aside; for the body is the material basis, the body is the instrument which we have to use.
Sri Aurobindo

Through its various activities including classes, workshops, healing therapies and art exhibitions, the centre facilitates one to get into a closer inner contact using the body as a medium to progress both physically as well as spiritually. Pitanga is a centre for the residents of Auroville welcoming the participation of guests in a spirit of learning and growing together.

Yoga at Pitanga: A Centre of Excellence

The centre has by now a history of more than 30 years of offering high quality teachings of different styles of Yoga. One of the founding members of Pitanga, late Nolly Senden, was a certified teacher in the tradition of B.K.S. Iyengar. With an incredible dynamic she developed a sustained practice of Yoga in Auroville. Since its inception, Pitanga’s activities are therefore deeply rooted in the Iyengar Yoga tradition. The group of passionate Iyengar Yoga practitioners is held since 2007 by Tatiana T., a Senior Certified Iyengar Yoga Teacher. With the popularity of yoga increasing, more professional yoga teachers joined, offering different Yoga styles: Hatha flow classes, Acro Yoga or slower restorative practices like Pranayama and Yoga Therapy are part of today’s program.

Classes are addressing children, teenagers, adults and seniors. Importance is given that practitioners have the opportunity to practice in the right level of class. The program offers classes for beginners, intermediate and advanced students as well as mixed level groups. Practitioners with special needs will also find their special class: Whether you are pregnant or recovering from a physical issue, needs can be met by Pitanga’s professional team of Yoga teachers.

Pitanga’s class rooms are small in size and beautifully appointed with wooden floors. Teachings are taking place in small group classes – and this not only since the pandemic is calling for it. Under the dedicated guidance of Pitanga’s teachers group classes help to create a strong sense of togetherness in the practice. Guests of Auroville are enjoying these classes as a way to get in touch with the “air of Auroville” while they are exercising with residents together.

As Yoga was traditionally taught by one teacher directly to one student, Pitanga offers also individual Yoga sessions. These one-to-one sessions are tailored specifically to meet the student’s individual needs, whatever they may be, and supporting the student one-to-one. These private sessions allow for individualized attention and guidance and are great for those wishing to go at their own pace or come for a limited time to Auroville.

Next to Yoga activities, Pitanga has always been blossoming with a wide variety of classes and therapies. Dance, Body Awareness, Aviva Health Exercises for women, Qigong, Feldenkrais, Self-Shiatsu, Physiotherapy, Thai Yoga Massage, Reiki, Cranio Sacral and other healing therapies are adding to today’s variety of programmes.

For many years, till 2015, Pitanga was proud to hosts Auroville’s own branch of Aikido, the Auroville Aikikai. With their need for more space, the group moved to their own centre, the Budokan at Dehashakti. We are keeping fond memories of their inspiring practice…

To know about what is presently humming and blossoming at Pitanga, please write to us: pitanga@auroville.org.in

Pitanga’s aim is to meet the needs of Aurovilians of all ages. As a community centre, Pitanga has always kept a soft corner for youth activities: Children and teenagers experienced over the years Odissi and Ballet dance classes, youth choirs, art classes, Aikido and yoga practices.

Activities with tradition are the Yoga classes for children and teenagers, held for many years by Lisbeth. They are a recognized part of the schools’ afternoon sports for children.

The Auroville Rainbow Child Program run by Gala has become one of the pillars of regular practice. The aim of the project is to help children to learn to be more focused and concentrated by teaching them through games how to connect inside. These classes are a fun learning experience and offer children to acquire new skills in addition to a formal school education. Under this umbrella Yoga, Energetic Games, Arts & Crafts for children aged from 5 to 13 are offered. When there is a space in the classroom the teacher is always happy to welcome a child from guests of Auroville.

Whether it is an art or photo exhibition adorning its sunlit courtyard or an evening performance by a musician, Pitanga attracted for many years Aurovilians and guests irrespective of age or cultural background to their programs.

In times when Auroville had not yet the variety of collective facilities as today Aurovilians did not mind squeezing themselves in the hall of about 100 sqm to listen to the concert of the Auroville adult or youth choir. Naturally, everyone sweated on those evenings but the memories of those intimate moments of sharing are equally warm in our hearts.

Today with CRIPA being available as a large facility for dance, theatre and choir practices and performances, Pitanga’s value still lies in the capacity to host more intimate performances, like Indian classical music concerts or Western Chamber music.

The courtyard and hallway serve still as an exhibition space for artwork. The aesthetics of the building are a beautiful backdrop to artworks displayed on the walls. Artists like the fact that their work is exposed to the visitors and participants of the centre. Today we could call this effect “Art on the go”.

Missing is eventually just the coffee with it - but maybe a place for this will also come into existence one day.

Built by Aurovilians for Auroville

What makes Pitanga so special and dear to the hearts of Aurovilian residents is that this centre got into being by the creative ideas and the generous contributions of two Aurovilians from Brazil, Ila and Paulo, themselves professional dancers, and the then Newcomer Nolly.

Named after a sweetly flowering cherry bush in Brazil said to bring peace and harmony, Pitanga has also a meaning in the Indian tradition: In Sanskrit, the word means ‘golden body'.

Conceived and built in 1991 as one of the first buildings in the community of Samasti, Pitanga’s final design envisioned the centre to have 6 studios/rooms and a larger hall for dance, workshops and performances branching out from a sunlit inner courtyard with a fish pond. Pitanga was meant to be a beautiful and efficient work instrument, a sort of academy, conservatoire where all disciplines could blossom in peace, in concentration and joy. True to its name, Pitanga blossomed over the years into a centre offering a wide repertoire of activities and services.

As Paulo described “The whole process was spontaneous. We didn’t start out with any large ideas. The needs came one after the other, and we just tried to put them together. It was like choreographing a dance.”

Ila shared her vision thus, “I see ‘Pitanga’ as one more place in Auroville where people can come together and work on their bodies and on other aspects of themselves for their individual unfolding. And this will bring more positive energy for our collective growth.”

Since then, many Aurovilians have contributed to the development and upkeep of the community centre – either by offering their skills or their financial contribution.

The efforts of these many dedicated hands and hearts result in a sweetness in and around Pitanga that is almost like the perfume of the sweet-smelling flowering cherry bush, still growing in the garden. 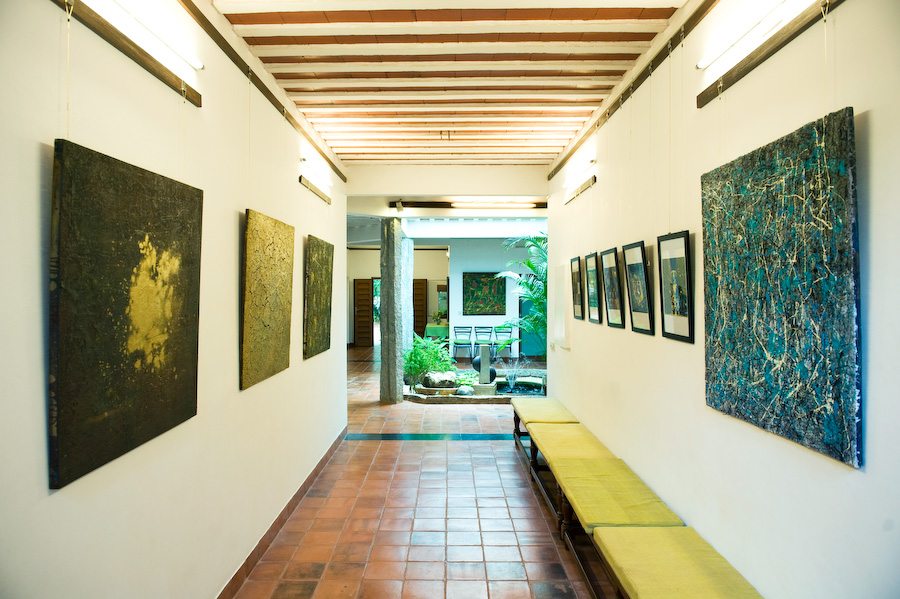 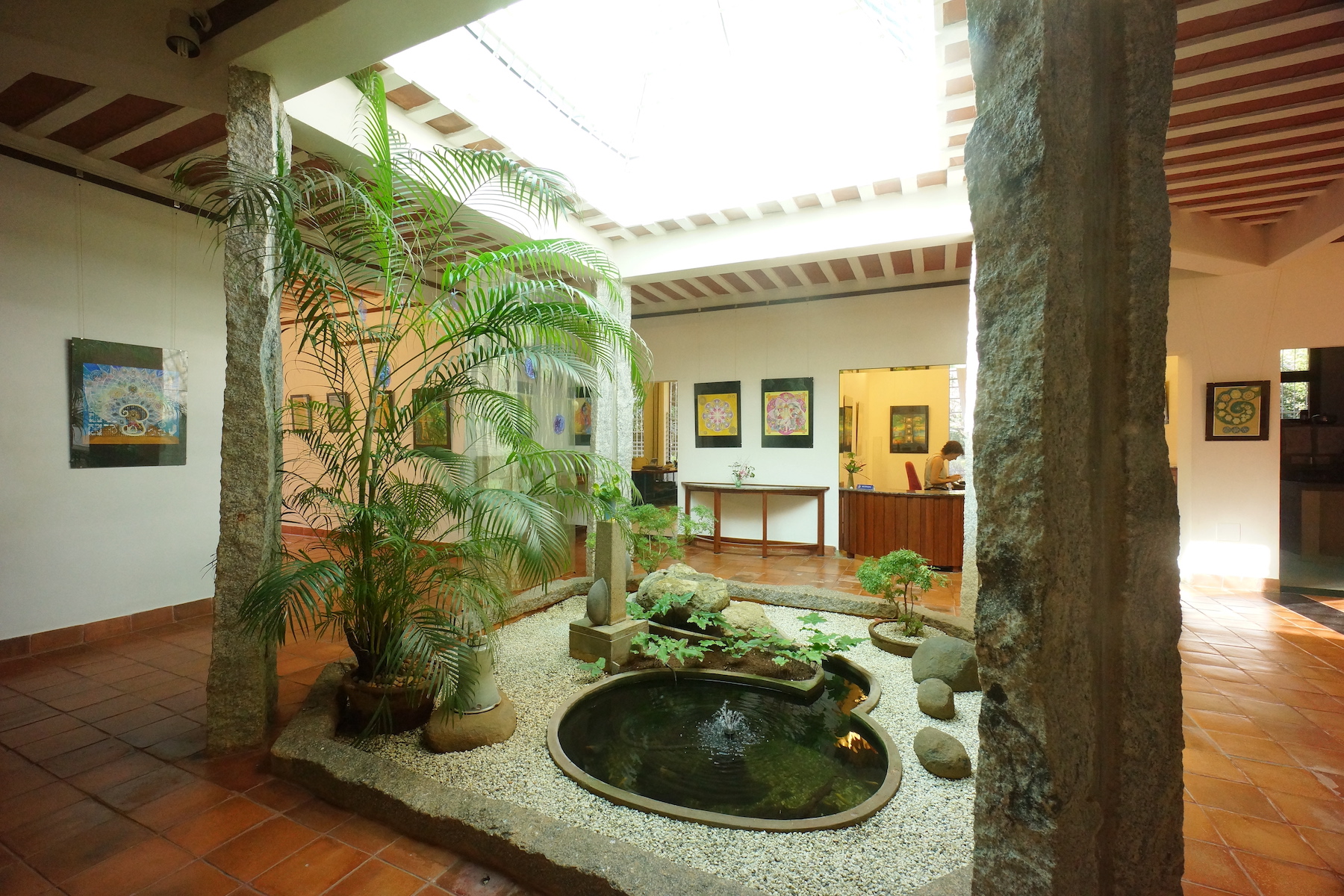 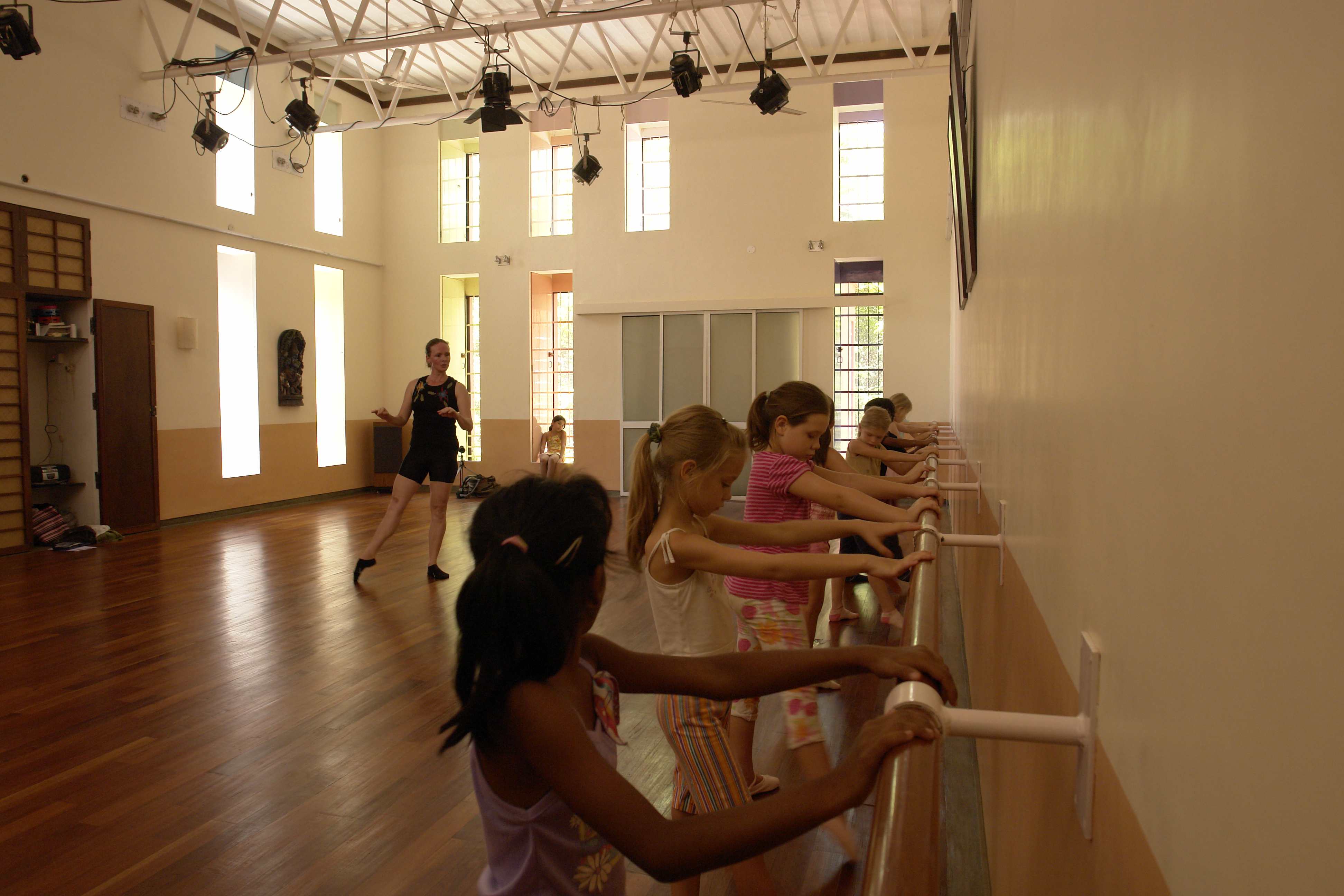 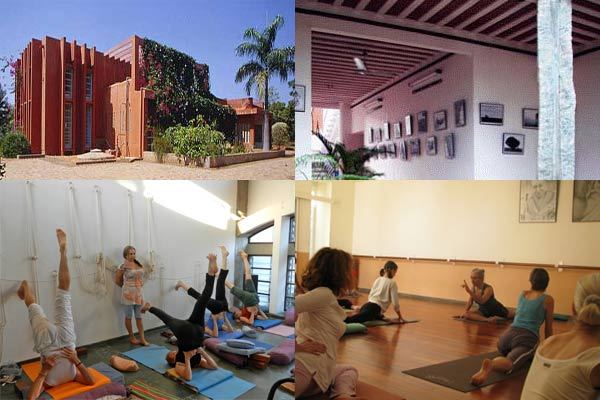 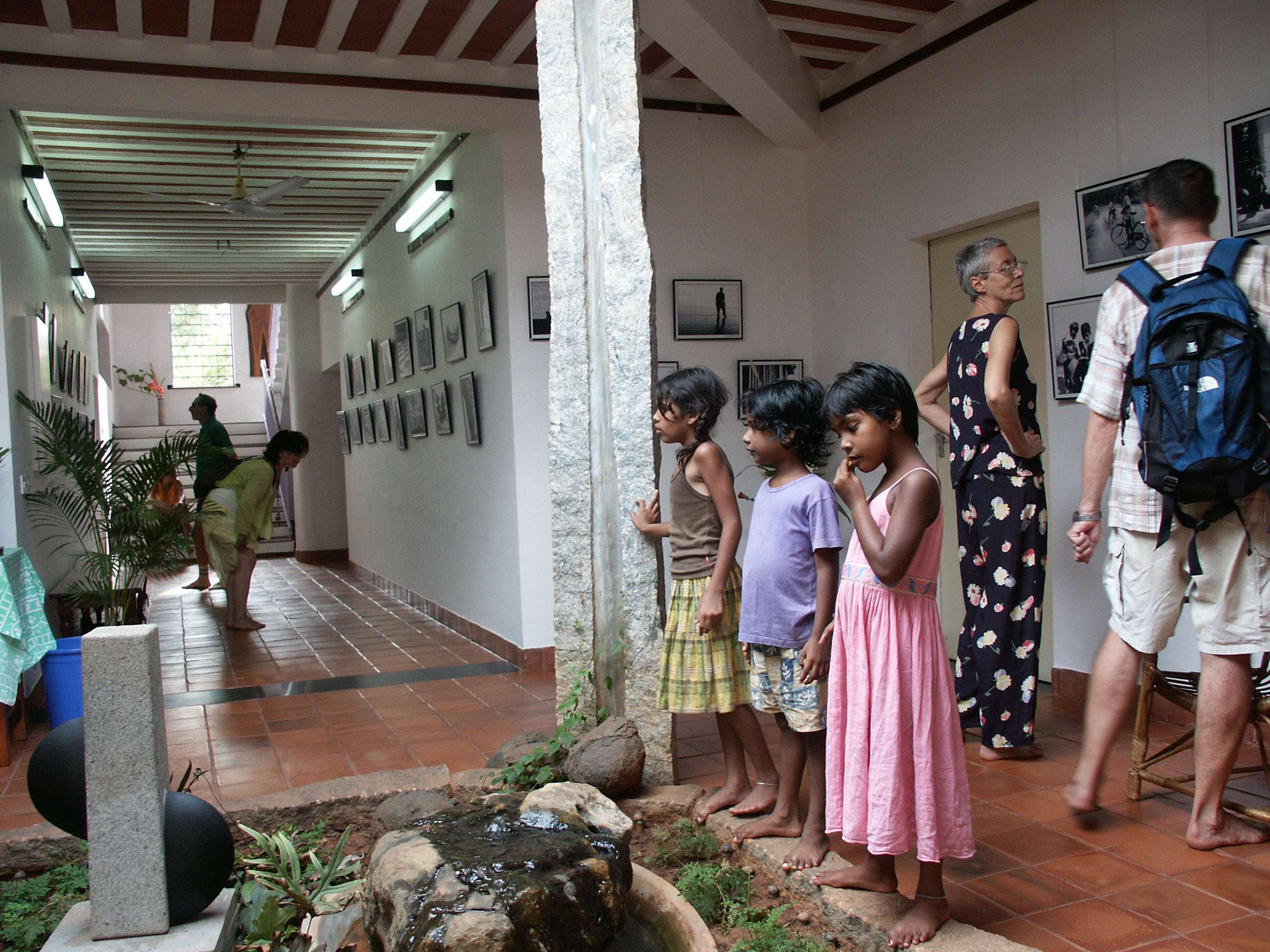