Auroville Water Harvest collects and processes a wide range of data pertaining to ground and surface water in order to gain a full understanding of the area. It is from these scientific investigations that we go forward with our remediation efforts.

Since 1996, the water resources (hydrology and groundwater) team is monitoring the water levels and quality parameters over a 200 sq. km area, covering the Auroville plateau and the wider bioregion. After the monsoons the fluctuation of groundwater levels and tank water correlating with the rainfall is measured, as well as the runoff in the hydrological network. Hydrological data is incremented using an automatic metrological station, and detailed topography of tanks, channels and ayacut areas is laid out using high accuracy differential GPS technology. All of this data is compiled in a database that also includes sociological information gathered by Harvest's social team. The collected information is processed in Geographical Information Systems (GIS) for further modeling. This provides us with thorough and up-to-date tools for watershed management.

Our monitoring of water levels and water quality in the wells of this region shows a tremendous decline in the level of the water tables due chiefly to over extraction (up to 45 m over 30 years in some locations) and an alarming increase of salinity in the groundwater, particularly in the Vanur aquifer, the main aquifer of the region. 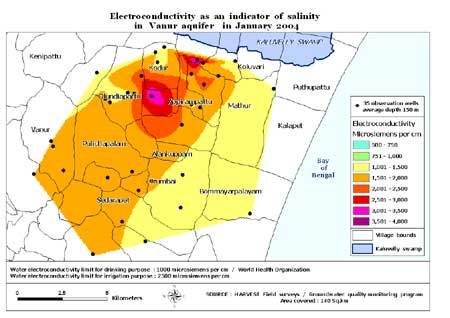 An ongoing collaborative research program between Harvest and a team of French scientists that has been recently integrated into the UNESCO HELP Basin Program, has been conducting research on the source of this salinisation. It has been discovered that the a ctual cause of salinisation of this aquifer is not yet from sea water intrusion but from several other factors including: upward leakage from an aquifer below Vanur, the input of brackish water into the Kaluvelly swamp and the infiltration of concentrated waters by evaporation.

This basic figure represents a West to East (left to right) cross section of the Vanur Aquifer with the movement of the seawater in red, orange and yellow lines. It is based on the results of a 1D hydrodynamic model of the seawater/freshwater movement built with the available geological and hydraulic data.

The simple hydro-dynamic simulation model of the interface between seawater and freshwater shows that seawater intrusion can be expected to occur within 3 to 20 years after 2000 depending on the value of unfixed parameters (porosity) and boundary conditions (recharge rate) . Moreover, the model shows that some intrusion should have already occurred. The reason that it has not must be studied further (one possibility is a fault).

All the data shows that further seawater intrusion is very likely especially with such high extraction rates. If left unattended it could endanger the entire south part of the Kaluvelly watershed, and therefore Auroville. Presently, remediation of seawater intrusion cannot be achieved during a human lifetime. The consequences of such intrusion would be disastrous, as water for irrigation and drinking purposes would become scarce in the villages and the township of Tindivanam would see its main source of drinking water badly affected.

Harvest has undertaken the following projects:

Kaluvelly and Pondicherry Sedimentary Coastal Basin, a UNESCO HELP Program
This is a large pilot program undertaken to create a framework for successful sustainable water management in this basin. Presently, the hydrodynamic functioning of the whole system is poorly known and no water management laws have been enacted nor applied. The aim is to create an action-research and operational project to develop new methodologies in the field of: Hydrology and hydrogeology; tank rehabilitation; coastal area water management; policy development; environmental and water management awareness; and social development. The main objectives are: To understand present circumstances from a hydrological and socio-economical point of view; to quantify the fresh water resources and their time evolution in order to prevent salinisation in the aquifers; to define methodologies of system evaluation that could be applied and extended to other sedimentary basins; and to find good arguments to promote the introduction of water management rules/laws. 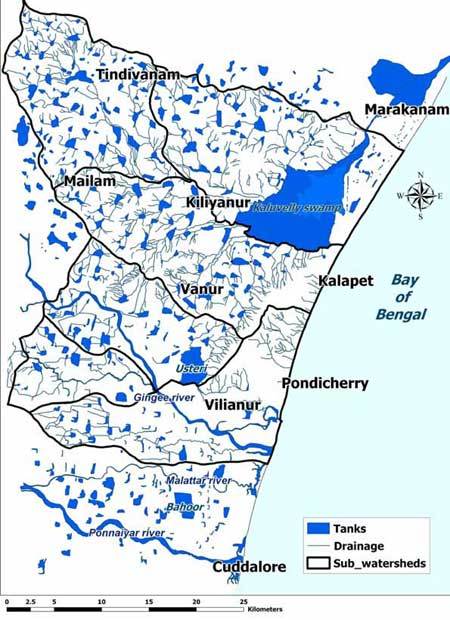 This Program is a continuation and expansion of a scientific collaboration that has been built between Harvest and a team of French scientists (Paris 6 University, Tours University , Rennes University and IPGP) to study the origin of salinisation in the Vanur aquifer of the sedimentary basin of Kaluvelly . Since January 1999, a team of French scientists coordinated by Ms. Sophie Violette (Pr. Hydrogeology) and Ms. Nathalie Gassama (Pr. Hydro-geochemistry) have worked together to assess the “Source of Salinity and Groundwater Circulation in Kaluvelly Watershed”. The first part, dedicated to the hydro-geochemistry resulted in the discovery of the current sources of salinisation (see the description of the groundwater situation up top). Currently, since October 2003, the hydrology and the hydrogeology phases of the study are being conducted, with the participation of Pr. De Marsily, an internationally awarded hydrogeologist and engineer.

This program also involves many partners including: UMR–Sysphe UPMC - France, CGWB – Chennai, TRPP-PWD - Pondicherry , PWD-SGWB - Chennai, and TWAD – Villupuram District to name some of them.

This research brought to light the absolute need to incorporate the village of Kottakarai , which is partly inside the International Zone, into the development plans. In terms of water management, Kottakarai is a very sensitive area due to its high water tables and its initial position in the chain of tanks in the Kaluvelly watershed. Pollution from garbage waste and human excrement pose a threat to the health of the people and of this water system. A pilot water and sanitation project for this village is currently in the works. The hope is to replicate this in the surrounding villages positively affecting the health of the entire watershed.

A pre-feasibility study on wastewater management and sludge disposal for Anglo-French Textiles was conducted in collaboration with Cynergy (Centre for Scientific Research). The solutions advocated tertiary treatment for the reuse of wastewater and power generation by sludge incineration in a gasifier.

A preliminary study was carried out for the E.I.D Parry sugar mills at Nellikuppam to assess the groundwater and the upcoming salinity threat to the cane growing areas.
The study included the quantification of groundwater extraction and water quality parameters covering 996 sq.km. The results showed degradation in both quality and quantity of the water, and it was forecasted that unless corrective measures would be taken rapidly, sustainability of the activities of the mills would be in jeopardy.

On grant by the Tamil Nadu Council for Science & Technology, Harvest has developed and completed a program of participatory hydro geological extension in which village youths are conducting hydrological surveys and assessments in 14 local villages. Through these youth a network of rainfall assessment stations for this area have been created.

This was a joint research project started in 2001 with Pondicherry Engineering College , the Auroville Planning and Development Council and Harvest to assess the Groundwater resources for the wider Auroville Area. The outcome was an extensive report that is now available. GIS Project, Indian Space Research Organization, Govt of India , Bangalore In the light of the ISRO promoting different schemes for India 's natural resources utilization, conservation, restoration and educational outreach programmes, a proposal was born to create a GIS office and training facility at Auroville as a collaborative effort between ISRO and Auroville. The GIS project is being executed under the direct authority of the Auroville Foundation with expertise support from ISRO.

The project commenced in January 2000 and is involving various working group of Auroville. Harvest is concentrating on the water and agricultural applications in this project. Data (spatial and non-spatial) acquisition and integration as well as processing are well underway. 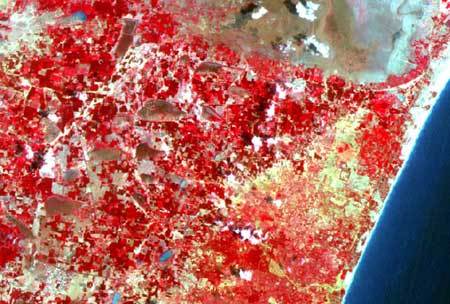 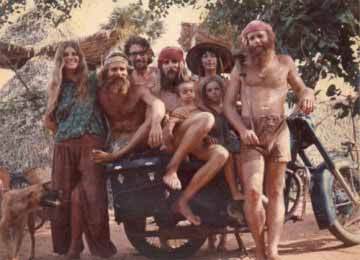 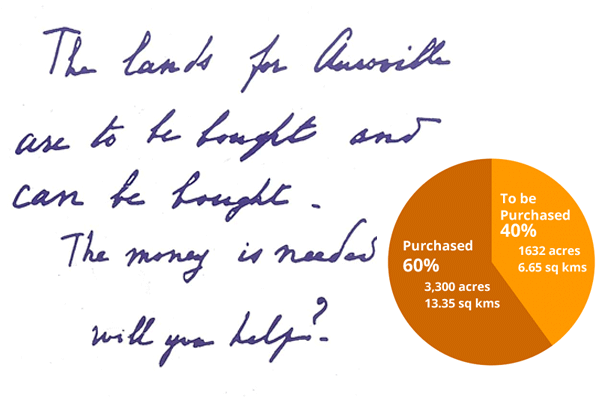 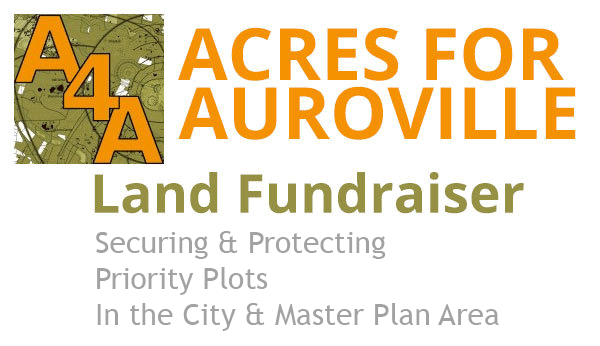