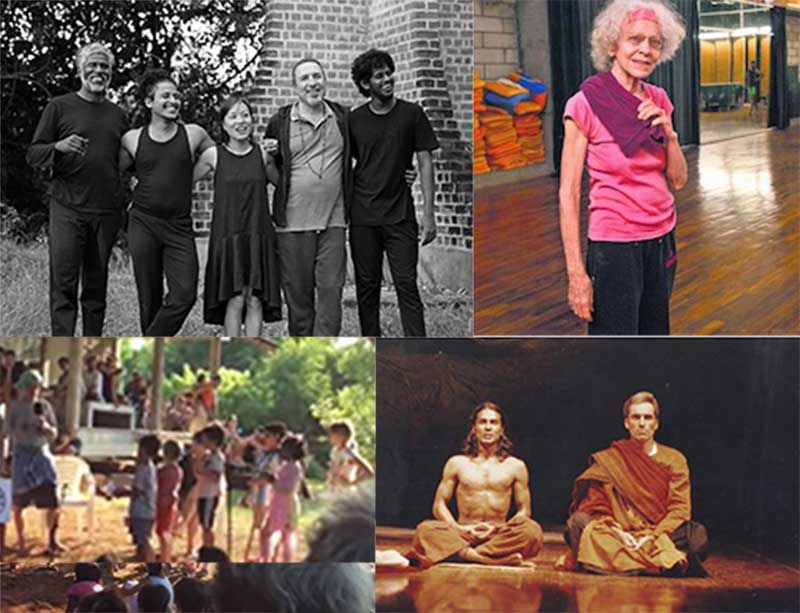 Auroville is a spiritual endeavour, and creating theatre in Auroville involves heart, mind, body.. and lots of spirit.

In fact, the work on stage is a reflection of a process that may have started with a text into which one dives, tempted by its call.. The goal becomes then the opening up of the story to its widest dimension, while finding that, as the story unfolds, its inner dimension becomes the key..

We search for Truth and a fineness of expression, we experience the joy of a tale unfolding and of ourselves as artists growing.

Often, we give it time.. Time to dig deep and look wide.

Whether working through improvisation or with a text, Auroville offers a unique opportunity to mix languages, cultures and ages in its theatrical expression: unity in diversity through the sacred act of playing together.

Theatre in Auroville has delighted audiences since the very beginning, when Deborah Lawlor from the United States created a dance/theatre called 'Praise' in the Forecomers canyon area in 1969. Since then, theatre has been an integral part of the creative life of Auroville, whether performed in English, French or Tamil (and sometimes a mixture of all three!). Dramas, comedies, improvisations, mime, operas, shadow plays, theatre sports, dance/theatre, plays for children, all have been enjoyed by Auroville audiences, attracting spectators from nearby Pondicherry as well as visitors from abroad.

Auroville has also been the venue for many performances by Aurovilians as well as visiting theatre artists, who have enjoyed playing for appreciative Auroville audiences. Groups and individual performers from Pondicherry, Mumbai, Chennai, Cochin, Calcutta and Bangalore as well as from the United States, France, Germany and Finland have performed in Auroville's Sri Aurobindo Auditorium (a 750 seat, proscenium stage auditorium).
Smaller performing spaces such as Pitanga Hall Dance Studio, the Visitor's Centre, Kalabhumi, Last School and Transition School amphitheatres have also been used.

Auroville theatre has presented classicial work from all over the world - Indian Kattakali, French farce, American realism, British satire, Japanese Bhuto dance/drama - as well as creating its own, exciting, experimental theatre.
The Auroville Theatre Group has performed such contemporary work as ' Waiting for Godot', ' Rosencrantz and Guildenstern are Dead', ' Black Comedy', ' the Bay at Nice', and 'Endgame', as well as new plays written by Aurovilians; for example, 'The debate of Love and Death' based on Sri Aurobindo's Savitri, 'The Legend of the Kaliveli Siddha' and 'The Greedy Man'. Renowned Indian directors such as Chandraleka and Veenapani Chawla have performed new works in Auroville's Sri Aurobindo Auditorium.

Over the years, Auroville has purchased a small complement of theatrical lighting equipment, including lamps, lamp housings, cables, gels and a dimmer board. A storage space in the Auditorium houses a number of costumes from previous shows, but there is very little room for storing props, set designs and scenery. There is no set design or props workshop. Costumes are designed elsewhere in the township and stored in the dressing rooms until each show is finished.

We have a small theatre collection within the main Auroville Library. This collection consists of plays, dramatic criticism and theory, but there are no magazines or journals. The Centre for Indian Culture also has several volumes on Indian theatre, dance, music and stage performance. The Auroville schools keep several videotapes of performances, including some of Shakespeare's plays by the Royal Shakespeare Company. There are also some private videotape collections that can be made available.

Theatre classes in improvisation, acting and Shakespeare scene study have been part of the training of Auroville actors. However, there have been no classes in aspects of design, such as lighting, set, or costumes, nor has there been any organised attempt at teaching Indian Theatre or World Theatre
History. We are also still lacking in classesfor playwriting, directing and dramaturgy.

Sharing of skills and talents

Theatre artists and teachers from abroad have come to Auroville with a wealth of experience and dedication. Sharing unstintingly their skills and talents, Auroville's actors, directors and designers from India, the United States, France, Brazil, Italy, Russia, Switzerland and Germany have, at times, developed performances of great depth and beauty, sometimes with very little funding. There is, however, as yet no comprehensive training programme being offered. We are working towards organising this, so that the next generation of actors, playwrights and designers can be encouraged to stay in Auroville and think of theatre as a possible, continually evolving and rewarding profession.
For info on the Auroville Theatre Group and its upcoming productions, as well as playwriting, editing, and acting classes for individuals or groups, contact Jill at Ph. 0413-2622840 or 9486416173 E-mail jillswar@auroville.org.in
For research into and performances of Sri Aurobindo's plays, contact Aryamani at 0413-2622718.
Some video excerpts from a theatrical offering by a collective of Aurovilians, directed by Aryamani, inspired by "The four secret souls of Savitri" passage in Sri Aurobindo's "Savitri":
https:www.youtube.com/embed/9SucvI6hftA
Enter the video url