Since the mid-nineties, the Janaka Art Studio in ‘Ravena’, one of the settlements in Auroville’s Greenbelt, finds artists from north and south America, Europe and Asia working together in the tranquil atmosphere of the place, researching sacred art from different traditions using south Indian techniques, in particular those of traditional Thanjavur art*.

Initiative was taken by Jocelyn of Silence, who, originally from USA, has lived in Auroville since 1969 when she began working in New Creation. Jocelyn has started a number of workshops, maintained a forest and a mango grove, worked in development, administration, festivals, - to finally find herself taken by south Indian art. She wholeheartedly plunged into to learning to understand the art of the region.

How the studio came about..

“I have always loved traditional Indian art.. Several years ago my son-in-law asked me to buy him a Thanjavur painting, and I found a master of Thanjavur art in Pondicherry, Ganeson, who had an art school there.
I bought some paintings and enabled two Aurovilian ladies to study with him. He and I became fast friends and we would go every Sunday morning to Matrimandir.

One Sunday, Ganeson suggested we make a studio in my house and I agreed, interested to work on the paintings myself, and unwilling to go into Pondy to his school there. So we began working with several local students, learning about the paintings, the vegetable dyes, the gems and all the other myriad details.

Several Aurovilians have joined and work with us, like for instance Miki, with a Master's degree in painting from Canada, and also ShivKumar from Kuilyapalyam village who studied at New Creation, and Paravatum who never went to school until I arranged for her to go to Ganeson's art school.

It seems to be an active dialogue with the gods and goddesses that are depicted in these paintings, and we go deeper and deeper into the tradition.. Our work becomes more original because we do not confine ourselves to the sketches used in the popular commercial Thanjavur paintings, but are now doing a series on Vedic gods, and avatars etc. We often read appropriate texts to try and understand the myths we are painting and it’s a very engaging research. In fact.., the art in this house is really something interesting.., - something very amazing is happening here while working on these beautiful gods..”

* The tradition was initially completely dedicated to the Shiva puranas , but in the 16th century King Serfoji of Maratha - who had fled to the South when his land was invaded - brought Krishna & the Gods of the North, and included them in the paintings in his temples and places. For the last two hundred years, the paintings have been done on boards as well as walls of temples, and the original 3 colors have become a complete rainbow palette, using tree gum mixed with tamarind paste. Other influences led to the use of gems and gold in the paintings, which are loved and cherished by people in south India.

'The play of painting" at the Auroville Kindergarten 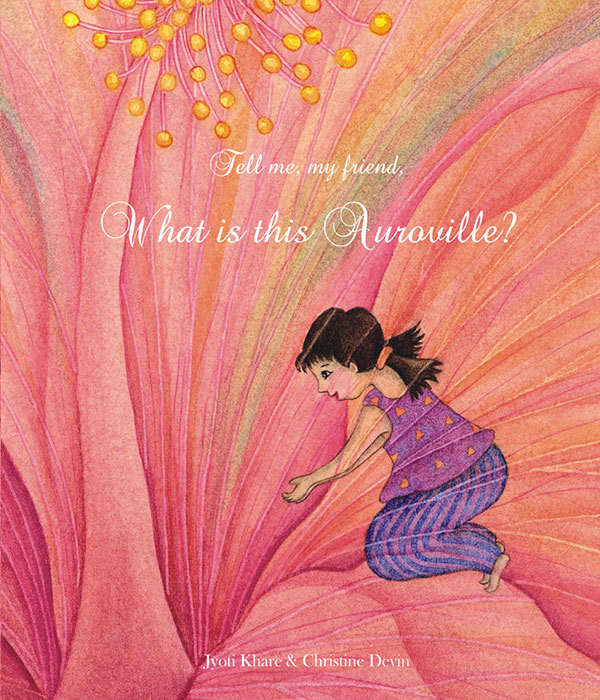 Tell Me, My Friend, What is this Auroville?