Ikebana is the Japanese art of flower arrangement. Ikebana is more than simply putting flowers in a container. Ikebana is an art, in the same sense that painting and sculpture are art. It has a recorded history; it is backed up by articulate theories, and it is concerned with creativity. In Japan, flower arrangements are used as decorations on a level with paintings and other art objects.

It is a disciplined art form in which the arrangement is a living thing in which nature and humanity are brought together. It is steeped in the philosophy of developing closeness with nature.

As is true of all other arts, ikebana is creative expression within certain rules of construction. Its materials are living branches, leaves, grasses, and blossoms, anything can be used and even a small weed can be given an important place in an arrangement. Its heart is the beauty resulting from colour combinations, natural shapes, graceful lines, and the meaning latent in the total form of the arrangement. Ikebana is, therefore, much more than mere floral decoration.

To say that ikebana is a full-fledged art does not mean that it is esoteric. The greatest creations in the field are apt to be made by the most highly skilled experts, but, as in painting and sculpture, there is plenty of room for amateurs. Almost anyone with a little time and inclination can acquire sufficient skill to make beautiful arrangements. Still, as in the other arts, it is necessary to master certain fundamental techniques before proceeding to free creation.

Nowadays in Japan, there are many schools, each one having its own distinctive style and rules of composition. But in the most traditional school of Ikebana, the three main stems are said to represent Heaven, Humanity and the Earth. In Ikebana, empty space plays an essential part of any arrangement The elements, placed asymmetrically, are given emphasis by the spaces.
Thus, the totality of a well-done arrangement brings about a state of serenity and peace to the viewer.

Born around the 6th century in Japan as a religious offering at Buddhist temples, Ikebana slowly became increasingly popular among the aristocracy and the samurai class. To reach a state of peace of mind and a state of concentration before going to battle, the samurai would perform both Ikebana and Tea Ceremony, - this would purify their heart and mind.

By the 16th century, Ikebana had become a Zen practice. Many practitioners of Ikebana fell that the Zen spiritual aspect of Ikebana is very important. One became quiet when one practices Ikebana. It helps you to “live in the moment” and to appreciate things in nature that previously had seemed insignificant. One becomes more patient and tolerant of differences, not only in nature, but also more generally in other people. The ephemeral side of Ikebana helps us to not become attached to the material creation; but rather to love and to respect it in the real moment of its existence.

One is silent when doing Ikebana, even the teacher will speak little. Following Japanese tradition, the apprentice learns by watching and then doing rather than by listening. Together with some flowers, leaves, a vase, and our inner being, we achieve silence and harmony between Nature and ourselves. This is the true philosophy of Ikebana.

Man has never been as far from nature as he is today, Ikebana is a way to help reconnect to the essence of creation.

Born in Sicily, Italy. Degree in Psychology from Padova University.

Sailing a yacht around the world for 8 years with her Japanese husband. She lived in Japan for 14 years and studied Ikebana for 10 years at the Sogetsu School where she was awarded a teacher's degree, and the name "Suiren"(Lotus flower).

Valeria is originally Italian but she professes a deeper identification with the Japanese culture.

She lives in Auroville, with her husband and her daughter, and gives talks and classes on Ikebana all year round. 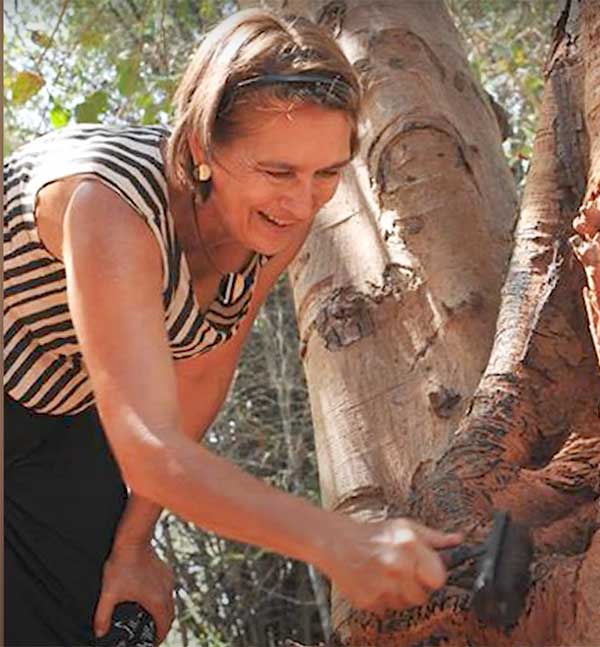