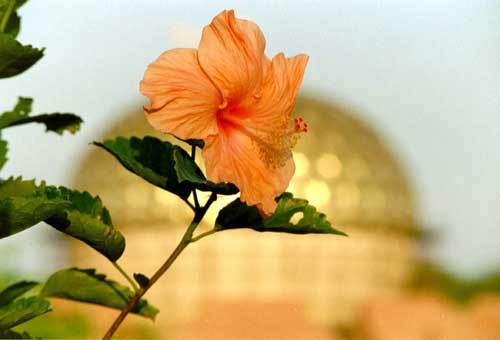 Flowers bring a touch of eternity, joy and beauty which lie beyond the sorrows and cares of the human world. According to The Mother, apart from the colour, fragrance, beauty of form and texture of a flower, there is something more - an aspiration, an emanation, an aspect, a psychic giving, wordless prayers of Nature and a progress in the evolution of the Earth. All these attributes together form the spiritual significance of a flower. A conscious and intimate relationship with flowers can give an experience of communion with the Divine and awakens the true consiousness in us. The Mother, over time, has given spiritual names to nearly nine hundred flowers revealing their deepest aspiration.

The Mother has named the Hawain Hibiscus as the flower of Auroville and given it the following significance:

"It urges us to live at its height."