February 27, 2018: Auroville came into existence on 28th Feb 1968 when youth from 124 different nations and 23 Indian states, deposited a handful of their native soil into the Urn, a marble clad structure in the form of a symbolic lotus bud, located in the centre of the Amphitheatre. The Auroville Charter - handwritten in French by the Mother - rests along with this soil, sealed in the Urn, as a powerful message and promise for the future.

We badly need Centres of Human Unity and Auroville is an outstanding example. On the occasion of the 30th anniversary of Auroville, I had explained the relevance of Auroville, in an article titled “A Centre for Human Unity” (The Hindu, Feb 1, 1998). It is appropriate that our Prime Minister participated in the 50th anniversary of this unique city. At the moment, we need such initiatives to promote mutual understanding and cooperation in achieving the goals such as food, and health for all. Atleast in our country there should be a Auroville in every state to serve as an example of the potential for human understanding and respect.

Message of Dr. Vinay Sahasrabuddhe, Member of Parliament (Rajya Sabha) & President, Indian Council for Cultural Relations (ICCR) on the occasion of the 50th anniversary of Auroville.

Heartiest congratulations and best wishes to the Auroville community and the Auroville Foundation for completing 50 successful years since its establishment. The philosophy of Sri Aurobindo and humanity-centric vision of The Mother are the main ingredients for the basic principles of Auroville. The Mother envisioned a system with a consciousness of spirituality, a sense of equality and a continuous flow of energy towards education and culture. Auroville came into existence in 1968 as a result of this vision. Auroville continued to flourish and develop in the last five decades with equality, independence, education, promotion of Indian culture and human values.

Auroville is setting an example by acting as a bridge for connecting ancient knowledge in Indian culture with the present. Today, when efforts are being made at a global level for humanity, equality and peace, Auroville has taken the lead with its inspiring work. We have been looking at the philosophy and ideas of Sri Aurobindo as a formula for solving worldwide problems. People associated with the Auroville community and the Auroville Foundation are doing the important work of advancing the philosophy and ideas of Sri Aurobindo, for which they deserve to be congratulated. One feels proud to acknowledge the fact that Auroville has emerged today as a centre of ideational attraction for people from more than fifty countries across of the world.

I again congratulate and extend best wishes to the organizers for celebrating the Golden Jubilee function on 28 Feb, 2018 on successfully completing its 50 years of existence.

"Auroville is a community dedicated to working (...) to develop living forms, both architectural and environmental, which will transcend our level of community living which is fraught with such heavy penalties to human beings and to the global environment. (...) I believe that Auroville deserves help ..." (1973)

"As one deeply involved and concerned with education as a means crucial to world peace and an evolving humanity, I have greatly appreciated the ideals and work being done by Auroville (...) I would encourage and invite your help in Auroville's realisation for the Earth."

Ram Dass, visiting Auroville in December 1992, during a talk with Aurovilians:

"There are very few expressions on earth at present that have Auroville's level of aspiration. The challenge will be to keep it up. It's an incredible game that you're playing, and you have all my emotional support."

Dr. M.S. Swaminathan, world-renown Indian scientist, in his acceptance speech to the Auroville residents as new Chairman of the Governing Board of the Auroville Foundation on 27th February 1997:

" I traveled in this area where you are now and I remember how it was a desert. You have made this desert bloom. Let the spiritual flame that is Auroville always remain an affirming flame in the midst of the sea of despair that we see all around. Let this flame be bright so that darkness can be dispelled. Thank you again for the privilege of serving this project."

David R. Brower, Chairman of the Earth Island Institute, USA, eminent and renown environmentalist, in his support letter as reference person for the nomination of Auroville for the Blue Planet Prize 1997:

"Auroville stands as one of the most courageous and hope-giving models of what is possible when the human will and spirit unite in a common action. (...)

Though Auroville has been endorsed by the United Nations and is recognised by an Act of Indian Parliament, it essentially remains a grassroots project. Its residence members, now nearly 1200 from more than 30 different countries, struggle not only to support themselves and their ongoing environmental work, but also many interrelated projects and village outreach programs. These include the integration of alternative energy and technologies, organic agriculture, and other community practices consistent with building a sustainable society.

I encourage you to assist this unique global community venture in its determination to reverse the tide of environmental destruction, demonstrating how to restore hope and compassion on the only Earth."

"Auroville has the advantage of having a unique specificity, which is the combination of spirituality with action in the material world. Spirituality does indeed call forth the better aspects of our nature and enables us to fuse passion and compassion in our work. But we also need to ground in reality, and this is something that is unique in this experience here. It is not disengagement from life, but engagement with it. It results in a holistic view where reductionist science can go side by side with spiritual uplifting. It seems to me that you are building on real achievements here."

German Consulate General, Chennai, India, in a statement on 26th May 1998 to the German Government supporting Auroville in a court case against the German Federal Tax Authorities, who had suspended the tax-exempt status of AVI Germany for German donations towards Auroville. After a struggle of two years, the court verdict was in favour of Auroville and the tax-exempt status of AVI Germany was restored beginning 1999.

"From personal experience (...) I can confirm that this project, existing since 1968, and supported by UNESCO from the time of its foundation, concerns itself with the attempt to form the model of a community of citizens, all dedicated to the idea of international understanding, which is open to people from all nations. (...)

The project aim involves the construction and operation of facilities, such as health centres, schools, farms, cultural institutions, collective housing, etc. that are needed for a population living in a steady community. To my knowledge all these facilities exclusively serve the creation of this city model of international understanding. (...)

Auroville has been founded in the spirit of the Indian philosopher Sri Aurobindo, who is recognised all over the world, and it considers itself, following its Charter, as a community which is dedicated to world peace and international understanding, not bound by any religion. Conversions of any kind are rejected as contrary to the spirit of the community and do not take place. Therefore, it is by no means a matter of a sect. (...)

In view of the portrayed facts it is incomprehensible that it is questioned whether this project, unequivocally dedicated since its foundation to the idea of international understanding, is worthy of support. This worthiness of support is persistently recommended by the Consulate General." 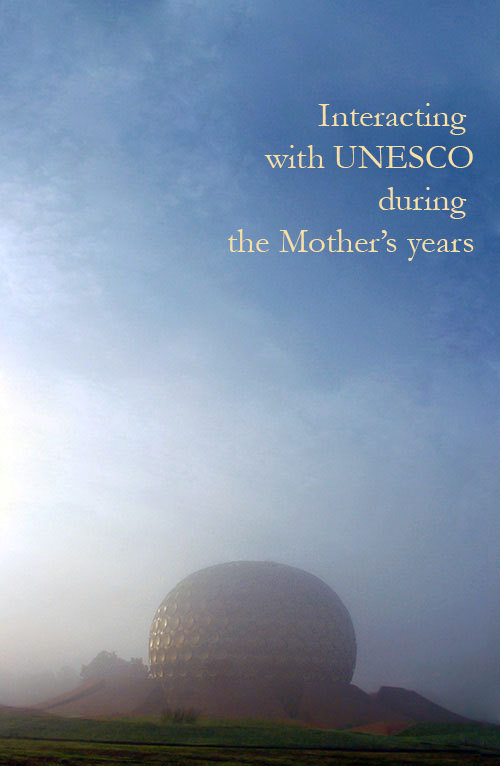 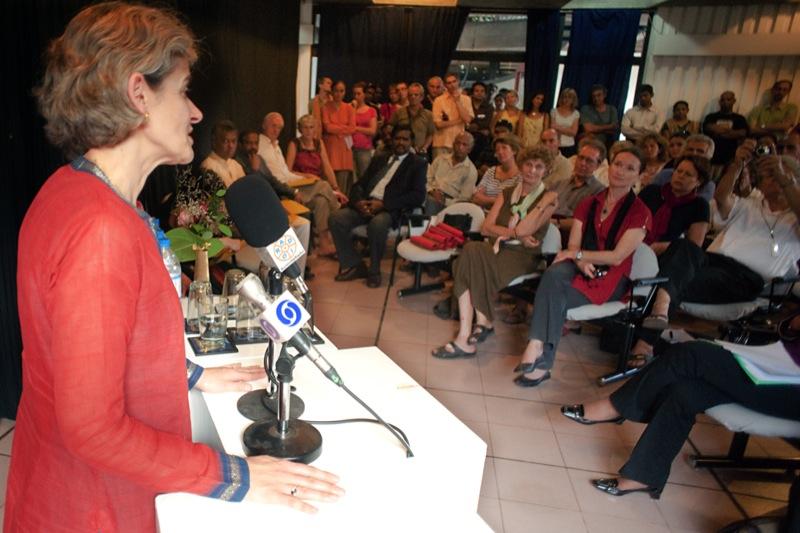 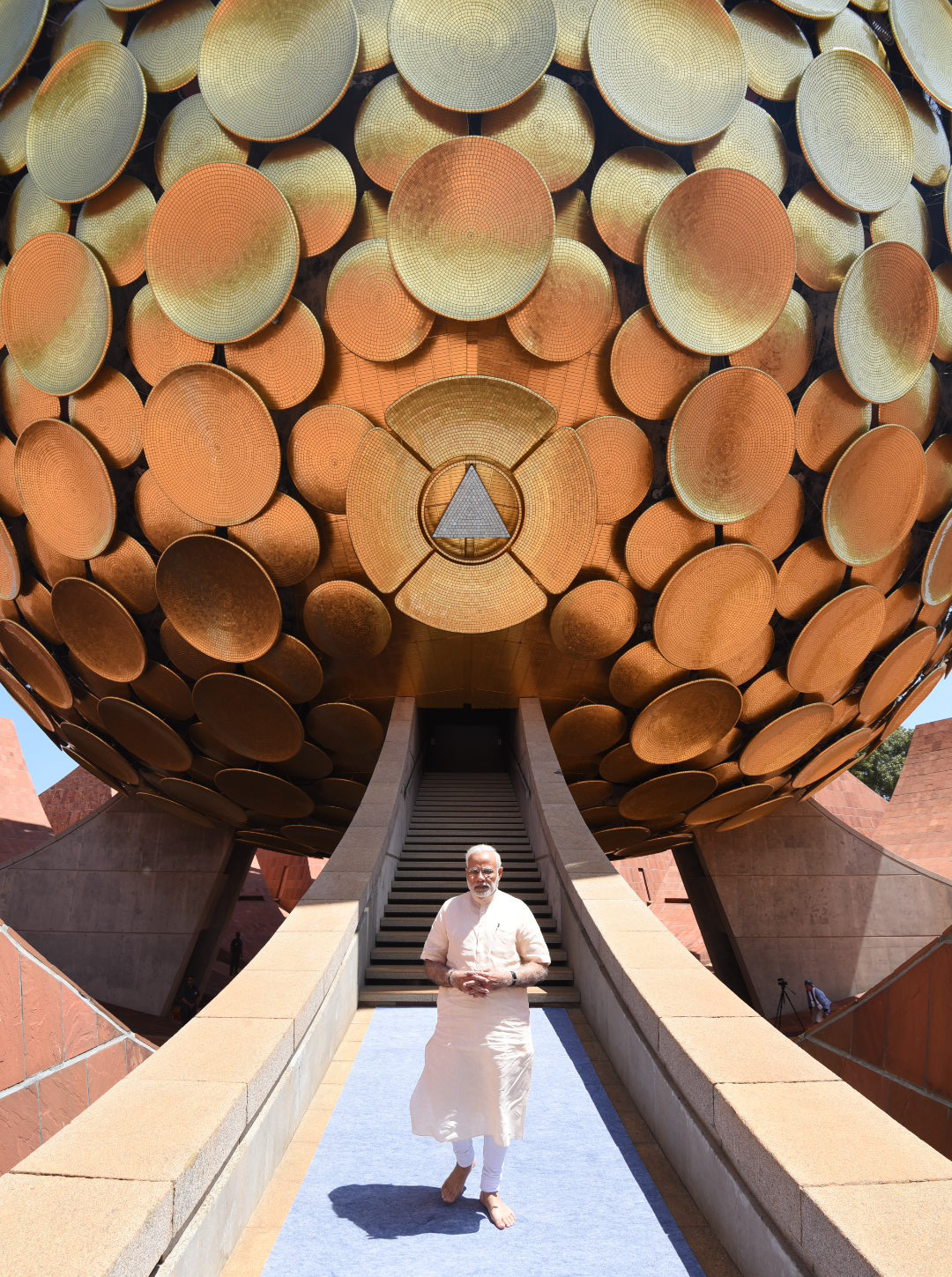