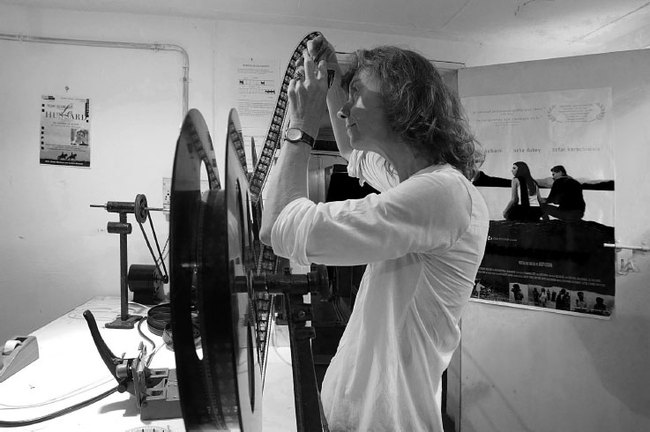 Aurofilm is an Auroville’s cine-service under SAIIER. Its purpose is to do research, study and promotion of the best values of Cinema and by doing so open the audience to discernment and widening, and possibly operate a change in our human nature... For that every Friday evening we offer a film screening at MMC, Town Hall with films selected from a large range of categories (international, Indian, recent, old, “classics”, children’s films, documentaries, experimental, etc. Our work place/studio is located in Kalabhoomi in the Cultural Zone of Auroville. There we produce films and propose regular classes: film appreciation (“Cine-master-class”), history of cinema, a special program on Animation and other related issues. Once a year (in February or March) Aurofilm organises a 3-day film festival with the presence of film directors, actors, technicians, film critics...

It was in the late nineties that we finally could acquire a rolling type screen (4×8 M) and a set of 2 professional, fixed 35 mm film projectors (Westrex/Cinerama) for the Sri Aurobindo Auditorium [photo with Gérard]. All this changed our life drastically as our Friday film screenings became somehow much more easy to handle… (we were basically a team of two people, handling everything by ourselves, from research, communication, administration, accounts, fund-raising, the film projection itself, electrical and other repairs, setting up of the heavy screen structure on the fully multi-purpose stage of the Auditorium, organising rent and transport of film cans to and from Pune, Delhi, Chennai, etc. etc.…! However it was during our 6th Panorama of Contemporary Indian Cinema in 2014, that we did screen our last 35mm film print and put it back in its cans & transport box. Interestingly, it was a beautiful and rare film, Ko:Yad (A Silent Way) a film in the Mishing language by the great Assamese writer and film director Manju Borah [Panorama poster photo]. From then on we have only screened films in digital format. With gratefulness and some amount of melancholy, we did acknowledge that a new era had come, and have surely embarked on its wave!

Aurofilm did participate in the production and the making of several films shot in Auroville since early time (like “Learning To Be” by Italian director Davide Montemuri in the early 80s). Then little by little, under the direction of Gérard, our team gathered some equipment and could shoot its own films -processing and printing them in the famous Prasad Laboratories in Chennai. We had these legendary (donated) 16 mm Paillard Bolex and Beaulieu cameras with their sets of lenses plus a few studio lights. Renting equipment in Chennai was also organised for the shooting days! [photo of Voyage d’Aurémie shooting]

With the “millennium” we bought our first digital camera (a Canon because of its interchangeable lenses). Some years later with the support of SAIIER, another camera (Sony), mikes and basic lighting equipment were purchased. Since then, Gérard and Aurofilm did produce a great number of short films of various genres and styles. This is now little by little put on display on our Aurofilm Peertube and YouTube channels for all to discover!

In addition to that, we hold bi-monthly “Cine-master-class”/film appreciation sessions. We also have restarted Film Appreciation and Animation classes for students of Auroville’s schools. We usually hold these activities in our premises, Aurofilm in Kalabhoomi where we have arranged our large half open-air film studio for this purpose (screen, black curtains, chairs for 30 people or so -much more if/when we change the set up and use the room, verandah and the garden)

Pre-covid era… we used to organise every year one or two film festivals in Auroville, with a focus on a particular theme or filmmaker. For many years we have put a special emphasis on the new or “Contemporary Indian Cinema”. Over 10 such “panoramas” have been presented, with whenever possible, the invitation of personalities from the film world to give talks and/or present their films during the 3 day event. The Aurofilm team also used to attend International Film Festivals in India as it is useful for public relations, to stay updated with the recent film productions and select films for our weekly programs and the annual festival, to be able to attend retrospectives of important film directors and also some master classes... [photos Shaji N. Karun in Aurofilm and Vasanth Sai in MMC and 1 or 2 film posters Bharat Nivas, IFFI Goa...]

Post-covid era… things have changed a lot as everybody knows. However, we have happily restarted our regular screenings, organised different festivals (a “Mini Indian Panorama” in 2020 and an “Animation Film Festival” in March 2022.) [jpg posters] We continue to work at improving our work place in Kalabhoomi as it hosts more activities. We are also getting ready to set up there a sort of film museum, showcasing our good old film/cine-projectors and other film equipment to inform, remember and teach about where Cinema comes from ...

Our purpose is always to promote quality cinema and provide information and education about the 7th Art in a spirit of discovery and creativity.

With the support of SAIIER, we Aurofilm team & Ann R. invited and hosted the visit of reputed Ladakhi film director Stanzin Dorjai Gya, who is also a great ambassador for Ladakh, sharing their culture and the environment issues they are facing.

In Auroville from 6th to 11th of December he presented several of his movies at Cinema Paradiso and some in Auroville and Outreach schools, with Q&A sessions. We also organized his visits to some units and Auroville projects linked to environment, which he appreciated a lot.

We are happy to share here a collage of pictures and also a link to an Auroville radio interview with Stanzin!